Growth Scare … Or a Recession?

Growth Scare … Or a Recession?

As we embark on 2019, investors are still in a daze after a challenging few weeks in the global stock markets. Volatility picked up in early 2018, subsided in the middle of the year and then reached almost unprecedented levels in the fourth quarter. The number of outsized daily and intraday moves in December shot up dramatically and approached all-time highs.

As a result, the S&P 500, Dow Jones Industrial Average and the Nasdaq indexes all experienced declines of more than -20% from their intraday highs of 2018. The S&P 500 index barely avoided the technical definition of a bear market with a -19.8% decline using closing prices, which preserves its bull market run by just about a whisker. Almost all other equity indexes did fall into a bear market using closing prices and the recent pain and angst certainly resembled the experience of bear markets.

The December decline was especially swift and staggering. U.S. stocks fell by more than -10% in less than ten trading days through Christmas Eve. Many market participants were surprised to see this unfold without the types of excesses and imbalances seen in prior periods of market stress.

Even as prices recovered after Christmas and into the New Year, stocks finished 2018 with their worst annual performance since the Global Financial Crisis. The S&P 500 index was down -4.4%, the Russell 2000 index of smaller companies fell -11.0% and foreign stocks fared even worse. Figure 1 shows how almost all asset classes experienced negative returns in 2018.

We examine the drivers of the recent sell-off to understand the broader concerns ailing the market. We go on to separate the perception of these risks from the likely reality of their outcomes in forming our 2019 market outlook.

The market has been preoccupied with a couple of key risks for the last several months — a slowdown in global growth and the prospect of a policy mistake by the Fed and other central banks.

We wrote last quarter about the “Decoupling of Global Growth” to highlight the divergence between weakness in foreign economies and strength in the U.S. economy. Investors latched on to this theme in real earnest in the fourth quarter as they extrapolated the decoupling of growth into not just a synchronized slowdown… but all the way to an outright global recession. At the same time, there was a growing perception that central banks, and the Fed in particular, would blunder into a recession with a rigid stance on tightening despite this slowdown.

The most punitive market damage occurred over a 3½-day period from mid-day on December 19 to Christmas Eve. The impetus for the meltdown came from a less-dovish-than-expected announcement from the Fed and was further exacerbated by uncertainty in Washington. 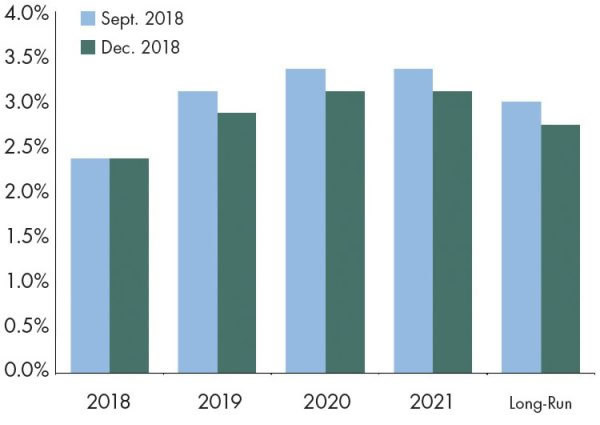 Figure 2 summarizes the December dot-plot to show the Fed’s two projected rate hikes in 2019 and then one more in 2020.

The Fed
The Fed hiked rates as expected by 0.25% on December 19. However, their latest “dot-plot” projections implied a median 2019 forecast for two more rate hikes. The narrative from the Fed also made reference to a “pre-set” course of action for the unwinding of its balance sheet. The combination of further monetary tightening and a rigid commitment to quantitative tightening for the balance sheet tipped investor concerns of a slowdown into fears of a recession. 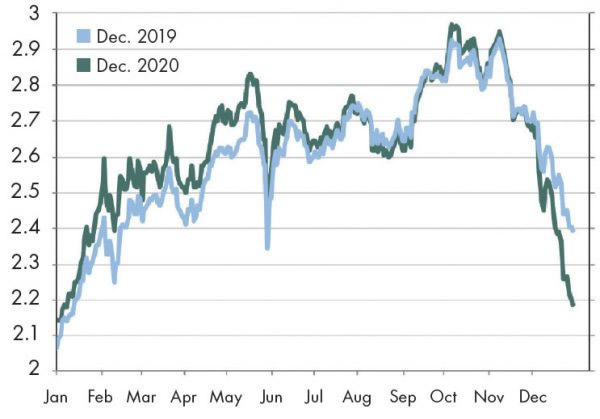 Figure 3 contrasts how different market expectations were relative to Fed projections. Data from the futures market indicated that there would be no more rate hikes until December 2019 with the Fed funds rate expected to hold steady at the current 2.4% level. And for 2020, the market was even pricing in a rate cut with its expectation of a 2.2% Fed funds rate.

Figures 2 and 3 best capture the divergence between the Fed’s position in December and market expectations at the time. The market’s conviction in December that the Fed would indeed commit a policy mistake was a major factor in the subsequent carnage.

Washington
At the same time, confusion and chaos from Washington exacerbated the situation. The White House and Senate Democrats failed to find a resolution on the budget ceiling and triggered a partial shutdown of the U.S. government on December 22. The resignation of the Secretary of Defense, James Mattis, on the heels of the administration’s decision to pull troops out of Syria added to the sense of uncertainty in Washington.

The markets were also spooked by swirling rumors of the potential removal of the Fed Chairman by political decree. And, in the midst of these new developments, investors continued to worry about the impact of the ongoing trade war with China.

We next examine the true scope of these risks to form our outlook for 2019. 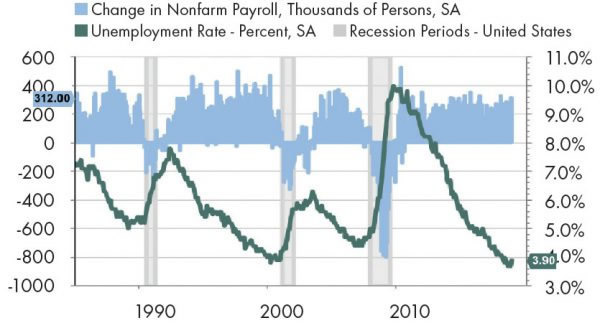 We offer our perspectives on the likely trajectory of growth and monetary policy in the U.S. We also take a look at equity valuations to see if they may offer any support levels for the stock market.

Economic and Earnings Growth
The sharp declines in stock prices and bond yields from December were likely pricing in an imminent economic and earnings recession. During the fourth quarter selloff , expectations for 2019 earnings growth had declined steadily from around 10% to just above 7%. However, the forward S&P 500 P/E of 13.5 times on Christmas Eve and the attendant 10-year Treasury bond yield of 2.6% seemed more reflective of a recession and negative earnings growth.

We believe that we will avoid both an economic and earnings recession in 2019.

Our cautious optimism is based on two key factors. We believe the global trade war, which has played an important role in the global slowdown, will get resolved without inflicting lasting damage. And while we acknowledge that economic and earnings growth will be slower in 2019 than it was in 2018, we hold out a modestly positive outlook for both the U.S economy and corporate profits.

The U.S. economy is more dependent on domestic consumption than it is on exports or investments. A big positive for the U.S. economy remains the health of the U.S. consumer. The labor market in the U.S. is still strong as seen in Figure 4.

More than 300,000 jobs were created in December alone and prior estimates for the fourth quarter were revised higher. The labor force participation rate grew as well, which creates a welcome element of slack in an otherwise tight labor market. Average hourly earnings are nicely higher at 3.2% — a level which should promote consumer spending without unleashing excessive wage inflation.

We understand that employment is generally viewed as a lagging or coincident indicator and that a lot of the recent focus has been on forward-looking surveys of economic activity. On this topic, global Manufacturing Purchasing Managers Indexes (“PMI”) have attracted a lot of attention. China’s Manufacturing PMI has continued to gradually decline. And a sharp decline in the U.S. Manufacturing PMI, seen in Figure 5, alarmed investors in early January. 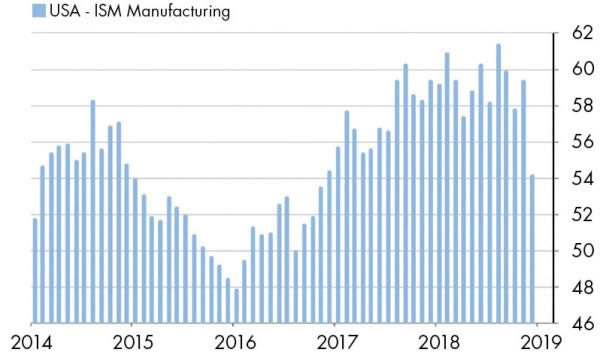 U.S. Manufacturing PMI fell from 59.3 in November to 54.1 in December. In isolation, it can easily be viewed as an alarming drop. However, we offer the following context in which to interpret both the decline and the current level of the index.

We felt that the fears of a policy mistake that the market priced in during December were exaggerated and unlikely to materialize. Our views gained more credence during Chairman Powell’s first public appearance on January 4 after the FOMC meeting. He articulated a new policy position of patience and flexibility, indicated that the Fed was listening to the markets and reiterated that there was no “pre-set” course of action for either interest rates or the Fed balance sheet. His remarks provided a major lift to the markets as their worst fears on this front were alleviated.

We believe the Fed will be more accommodative going forward than markets have expected.

Valuations
2018 was one of the rare years where earnings growth was strong and yet the stock market was down. As Figure 6 shows, a big detractor from returns was the compression in P/E multiples. 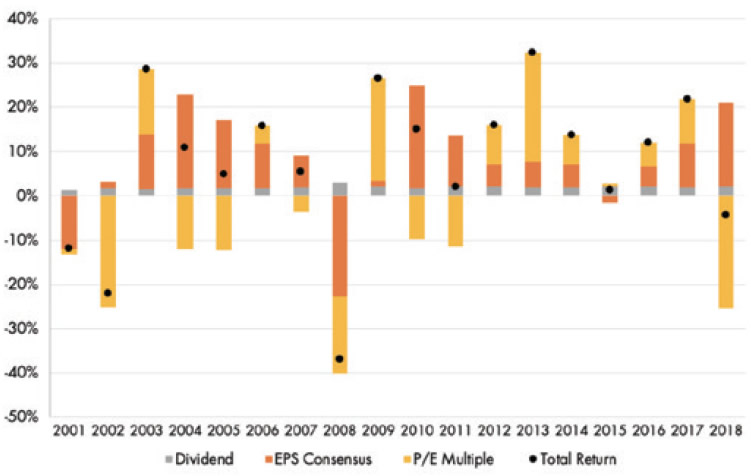 Barring a recession, we view this to be an attractive entry point into stocks. As long as we end up with modest economic and earnings growth, U.S. stocks appear to be undervalued for the first time in many years.

In addition to the prospects of a reasonably healthy U.S. economy, we also observe that the Fed’s more recent dovish position may lead to some weakness in the U.S. dollar. Since nearly 40% of S&P 500 revenues are generated overseas, any weakness in the dollar bodes well for profits at multi-national companies.

It is natural for investors to cast doubts on even well-designed investment strategies in the face of extreme volatility, sharp price declines and overall uncertainty. Despite these distractions, we believe it is best for long-term investors to stay the course in these turbulent markets for the following reasons.

We maintain the overweight to equities in our asset allocation and look for opportunities to add high-quality securities at better valuations.

“The number of outsized daily and intraday moves in December shot up dramatically and approached all-time highs.”

“The market has been preoccupied with a couple of key risks for the last several months – a slowdown in global growth and the prospect of a policy mistake by the Fed and other central banks.”

“We believe that we will avoid both an economic and earnings recession in 2019.”

“We believe the Fed will be more accommodative going forward than markets have expected.”

“We believe equity valuations are attractive – we maintain an overweight to stocks in our asset allocation.”