Stocks delivered remarkably strong performance in 2019. A year that began shrouded in doom and gloom under the overhang of recessionary fears seemed to brighten with each passing month. Stocks kept climbing one wall of worry after another in 2019 to scale new all-time highs. In a scarcely believable result, the S&P 500 index shot up by 31%, the Nasdaq index soared by 37% and the Russell 2000 index rose by 25%.

The sheer magnitude of stock market gains caught investors by surprise. The most telling feature of the explosive rally was that it came about in a year of almost zero earnings growth. Corporate profits stalled in the face of a tariff-induced economic slowdown, but stock valuations snapped back to more normal levels as uncertainty dissipated on a number of different fronts. The forward P/E multiple rose from a low of 13.5x on Christmas Eve of 2018 to 18.2x at the end of last year. The expansion in the P/E multiple accounted for virtually all of the stock market’s results in 2019.

In hindsight, the market’s performance was not all that surprising in light of just how many positive developments coalesced in the fourth quarter.

Let’s shift focus to an equally remarkable outcome within the global equity markets. US stocks outperformed foreign stocks again in 2019. While the S&P 500 index gained 31%, the EAFE index of developed international countries advanced by 23% and the Emerging Markets index was up 19%.

The handy margin of excess returns for US stocks in 2019 capped a decade-long run of outperformance. The dominance of US stocks is remarkable at two levels – stellar in terms of durability and rare in terms of magnitude. US stocks generated cumulative excess returns relative to non-US stocks of well over 100% in the last 10 years! 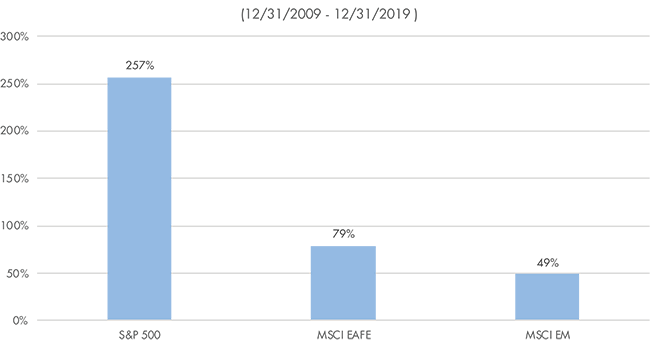 In this quarterly piece, we reiterate our long-held views on the differential fundamentals of the US and non-US markets. We highlight the unique composition of the US economy, the innovation of US companies, and their role in creating this impressive performance differential.

A defining characteristic of the US economy is how reliant it is on domestic consumption and how relatively immune it is to global trade flows. The US consumer is, by far, its biggest driver and accounts for nearly 70% of US GDP. The US consumer has also been remarkably resilient over the years which has led to more stable and consistent economic growth in the US.

In turn, the persistent strength of the US consumer comes from a solid job market in the US. At 11 years and counting, the current US expansion is the longest on record. Over this time, the unemployment rate has declined monotonically and today stands at a mere 3.5%. After stagnating in the first half of this cycle, wage growth has risen from about 2% to almost 3%. When combined with low inflation, the steady increase in wages has caused disposable incomes to go up as well, in both nominal and real terms net of inflation.

The strength of its labor market has been a key driver of steady US economic growth. It is worth noting that the US labor market has also performed a lot better than others around the world. We highlight this observation in Figure 2. 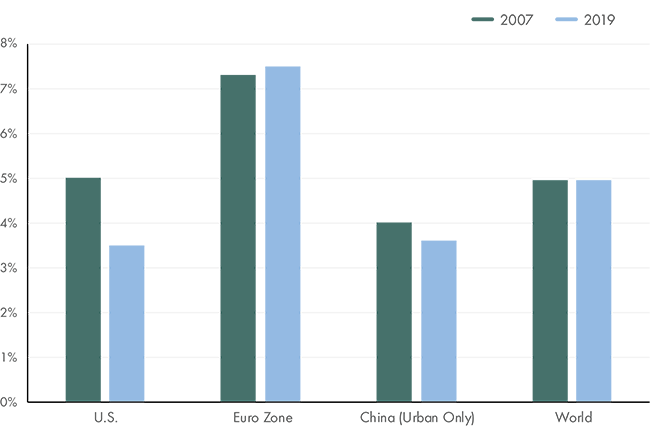 Consider today’s unemployment rate in different regions compared to those observed before the onset of the Global Financial Crisis. All labor markets struggled during the recession of 2008-2009 as unemployment rates spiked up universally. They also subsequently subsided from the post-recession highs in every region.

We can see, however, that the US labor market has shown the most significant improvement as unemployment rates have fallen below the pre-crisis level to a 50-year low. Foreign economies have not enjoyed nearly the same support from their respective labor markets as the US has.

The second noteworthy feature of the US economy is its relatively low dependence on exports and global trade. In fact, as a corollary to its high dependence on domestic consumption, the US is the least dependent on exports of the major economies of the world. We highlight this divergence in Figure 3 because the global trade war has been a dominant theme in the markets in recent years. 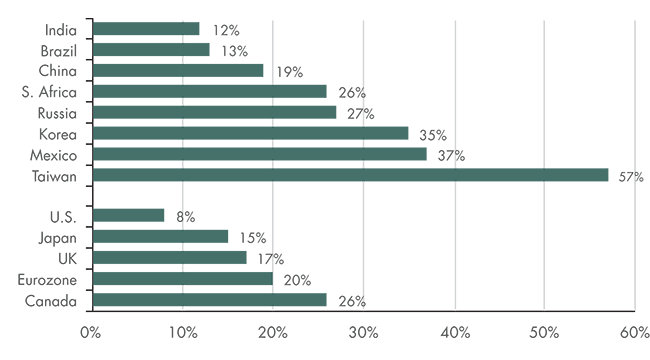 In sharp contrast to other emerging and developed economies, exports make up less than 10% of US GDP. It is hardly surprising then that the impact of diminished world trade flows has affected foreign economies to a much greater extent.

As an example, China relies on exports for 19% of its GDP and the Eurozone for 20% of its GDP. Prior to any impending relief from the Phase One trade deal between the US and China, the global trade war took a bigger toll on foreign economies and foreign stocks than it did on the US.

The relatively insular nature of the US economy has also made it impervious to several mini-shocks that have affected the rest of the world. Brexit, Grexit, oil shocks, the Eurozone sovereign debt crisis and currency wars are among a few such episodes that come to mind.

US companies have also set themselves apart from those in foreign markets in delivering greater innovation and, as a result, higher earnings growth. Profit margins have grown in the US over the last decade as Big Tech has ushered in a New Economy. Technology-enabled disruption and replacement of more expensive human labor has increased profitability and enabled earnings to grow faster even against a modest economic backdrop.

Figure 4 highlights this sharp contrast in earnings growth within the US and foreign markets. 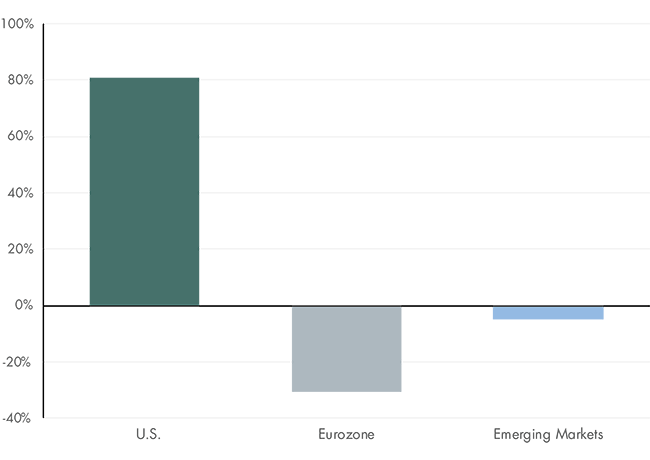 Figure 4 calculates the growth in earnings per share (EPS) from 2007 to 2019 in the US, Europe and Emerging Markets. EPS grew by over 80% in the US, but fell by almost -5% in the Emerging Markets and a more alarming -30% in Europe.

We know that price follows earnings and so it comes as no surprise that stock returns have also followed the same pattern. The US stock market has handily outpaced Developed Markets and overwhelmed Emerging Markets.

There is yet another, more nuanced, effect in play that helps explain the significant outperformance of US stocks. We also know that higher profit margins and higher profit growth result in higher valuations. The expansion of P/E ratios over time is an important source of stock returns.

In the US, it turns out that the two largest sectors by market capitalization, Technology and Health Care, are also the most profitable ones. These two sectors account for over 35% of the US stock market capitalization and almost 50% of the free cash flow generated by US companies.

The US is fortunate to domicile the biggest proportion of the world’s technology companies. The Technology sector alone contributes over 20% of the US market capitalization and over 30% of its free cash flow. In the era of the New Economy, the Technology sector now offers the rare confluence of high revenue growth, high profit margins and high earnings growth. 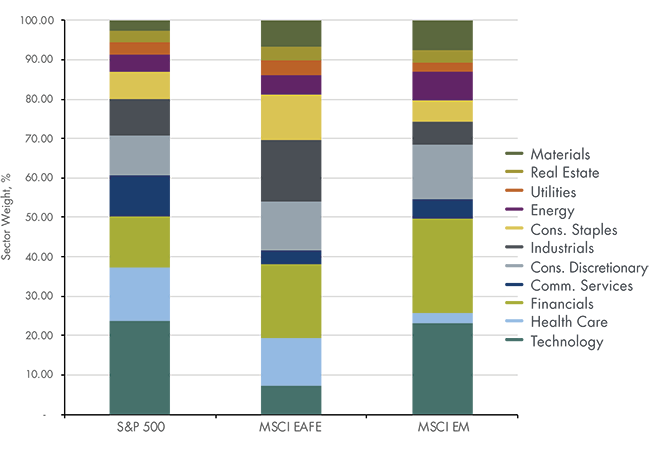 The US boasts a bigger concentration of its market cap in the profitable Technology and Health Care sectors than either the Developed or Emerging Markets. By contrast, the Developed and Emerging Markets are more heavily weighted in the Old Economy sectors of Financial Services, Industrials, Energy and Materials.

Overall sector composition, and specifically the heavy representation of the Technology sector, within the US stock market has contributed significantly to its stellar performance.

We have recognized these differential fundamentals over the last several years to overweight US stocks at the expense of international stocks. The validation of our expectations and forecasts in the form of the resulting outperformance has significantly benefitted our clients.

On an even more important note, we believe that many of the same drivers that have tilted performance in favor of the US stock market will persist into the future.

We maintain our preference for US stocks over foreign stocks for 2020. We remain cautiously optimistic about a modest pick-up in US and global growth. We retain our pro-cyclical tilt within portfolios but balance them out with an emphasis on high quality and growth as well.

“The unique composition of the US economy and the innovation of its companies has helped US stocks outperform foreign stocks.”