Even as the current economic expansion and bull market continue their remarkable run, investors are increasingly wary of rising valuations, geopolitical instability and potential policy missteps. Investors are also mindful of monetary headwinds as the Fed continues to raise rates and begins to trim its balance sheet.

While we are not oblivious to these risks, we wonder if they create an undue distraction from several positive developments underpinning global economies and markets. We cut through these market tensions to focus instead on the buoyant fundamental factors of economic and earnings growth.

We examine growth dynamics at several levels and conclude that we are likely firing on all cylinders of the growth engine.

We close out our discussion with a closer look at “The Big Unwind” of the Fed balance sheet and whether global growth can combat monetary tightening in the U.S.

We are now in the 100th month of an economic expansion in the U.S. that began in mid-2009. We have commented before that while the recovery has been long in chronological age, it has not been strong by historical standards. Real U.S. economic growth has barely averaged 2% since the Great Recession, well below its long-term average of 3%.

While some may find the more muted growth outcome to be disappointing, it is hardly surprising since the scars of a severe financial crisis typically take about a decade to heal. The modest pace of growth has brought with it low inflation, low interest rates and a Goldilocks backdrop of “not too hot, not too cold” to sustain a remarkable bull market in equities.

We contend that it is precisely the more sluggish rate of growth that augurs well for an extension of this economic cycle to eventually unprecedented duration. But this cycle’s longevity is not our key topic of focus; it is instead the synchronized revival of growth that we are witnessing globally.

We were encouraged a year ago by what we had then described as green shoots of a global revival. We believe that those green shoots have now blossomed into a solid and synchronized spurt of global growth.

As remarkable as it is to comprehend, 2017 is the first time since the Global Financial Crisis that global growth is as solid and as synchronized as it is now. The improvement in the global economic landscape in recent years from barren rust to lush green is strikingly evident in Figure 1 below. 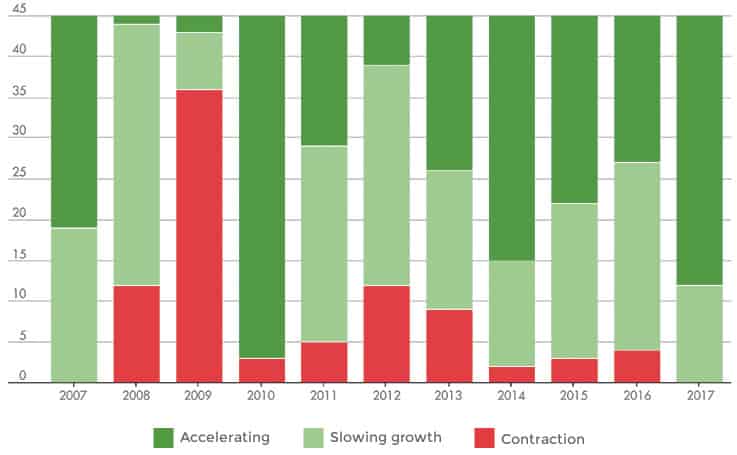 Figure 1: Synchronized Global Growth
Source: Wall Street Journal – Of the 45 major world economies tracked by the OECD, all are experiencing growth simultaneously for the first time since 2007.

A red-hot U.S. housing market and the related spillover effects into the sub-prime mortgage market led to the Great Recession in 2007. While the U.S. was the “first in” to the financial crisis back then, it was also the “first out” on the way to recovery. However, even as the U.S. economy has been healing for several years, the rest of the world has continued to stumble from one mini-crisis to another.

The Eurozone debt crisis in 2011 and 2012, perennial concerns about Grexit, prospects of a hard landing in China in 2015, OPEC’s misguided attempts during 2015 to protect market share through a crude oil price war, Brexit in 2016 and geopolitical risks in Ukraine, Syria and North Korea in recent years are just some of the impediments that have thwarted growth. Figure 1 clearly shows the retrenchment in economic activity during 2011-12 and then again in 2015-16.

The current synchronized revival of growth creates a number of positive effects. It lifts the burden from the U.S. as the sole or primary driver of global growth. With no lagging economies, the risk of economic or market contagion from an underperforming region of the world is now diminished. Foreign economies can continue to heal from the Global Financial Crisis in the midst of low interest rates, more quantitative easing and significant monetary stimulus.

International equity markets can now look forward to the prospect of rising P/E multiples just as the U.S. stock market did a few years ago. U.S. multinationals should benefit from stronger growth overseas and its related consequence of a weaker U.S. dollar.

We believe that these global growth trends are likely to persist in the near future. At the same time, we are also watchful for any signs that this already lengthy economic cycle may be nearing its end. But for now, we are not observing them in the traditional precursors to a recession. The yield curve is not inverted, the tightening cycle is only in its early stages and Leading Economic Indicators have barely recovered back to pre-2007 highs. We believe that the risk of an imminent recession remains low.

We next examine how a pick-up in global growth has translated into a steeper trajectory of earnings growth.

In concert with the trend of economic activity shown above, the U.S. stock market also went sideways from the beginning of 2015 for about 18 months. The period was characterized by several stock market sell-offs, at least one outright correction and macroeconomic uncertainty induced by fears of falling global demand and potential policy misstep by the Fed.

While we averted an economic recession in the U.S. and globally in that time period, we did experience a clear earnings recession for 5 quarters from early 2015 to mid–2016. The biggest contributors to the decline in corporate profits then were a rising U.S. dollar and falling oil prices.

Consistent with our synchronized global growth theme, the earnings recovery is also broad-based and global in nature. 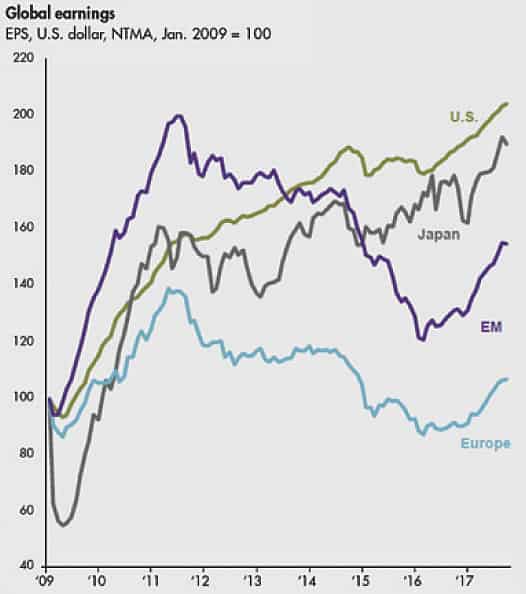 Consistent with our view of sustained economic growth, we believe that earnings growth will persist into 2018 as well.

The early part of the post-election rally in stocks was attributable to prospects of tax reform and deregulation that the new administration had promised to deliver. A lot of that optimism began to abate when early initiatives such as immigration and health care reform failed to gain traction. As sectors that stood to benefit from campaign promises gave up their early gains, the market gradually began to shift its focus from the fond hope of future outcomes to the reassuring reality of improving real-time growth fundamentals.

In recent weeks, however, there is renewed hope for some positive outcomes on taxes – at least in the form of tax cuts, if not outright tax reform. While details of how to fund the proposed tax cuts remain vague, it is likely that both corporate and personal income tax rates will be lower. The current proposal lowers the corporate tax rate from its statutory 35% level to 20% and personal income tax rates from the current 7 tiers to 4 brackets of 12, 25, 35 and 39.6%.

We expect the following likely effects from tax cuts or reforms should they be enacted.

We believe that stock prices most likely reflect the favorable impact of tax cuts, while earnings estimates do not. Because of these asynchronous timing effects of P(rice) and E(arnings), P/E ratios may appear elevated on a transitory basis. The same observation also suggests that stock prices may be modestly vulnerable if we see no tax cuts whatsoever. We are, nonetheless, encouraged that the current cycle still has a strong footing in improving organic fundamentals and is not simply supported by wishful thinking for the future.

… AND, FINALLY, THE BIG UNWIND

We would be remiss to not touch upon a major inflection point in U.S. monetary policy that takes effect in October. After nearly a decade of ultra-easy monetary policy that saw rates at zero percent and numerous rounds of quantitative easing (QE), the Federal Reserve has finally pivoted away from both policies.

The Fed has already hiked interest rates 4 times since December of 2015. Starting in October, it will now unwind QE and begin to shrink its balance sheet. It will do so by reducing the reinvestment of principal when securities in its portfolio mature. The Fed has signaled a slow and gradual pace to the run-down of its balance sheet – $10 billion per month to start, rising by an additional $10 billion every quarter, and capping out at a maximum of $50 billion per month.

We summarize our key observations below.

The current economic and market cycles continue to march along even as investors fret about rising valuations and geopolitical risks. We point to the strong support for the continuation of the cycle from the simultaneous and synchronized revival of global economic and earnings growth. We expect some fiscal stimulus from modest tax cuts. Finally, we believe that the economies and markets are still supported by a solid foundation of improving growth and low global interest rates even if U.S. tax cuts don’t materialize.

Our asset allocation continues to favor stocks over bonds – a position that has paid off handsomely in 2017 so far. At a security level, we continue to look for solid businesses with sustainable competitive advantages to compound wealth over long horizons.

“We examine growth dynamics at several levels and conclude that we are likely firing on all cylinders of the growth engine.”

“2017 is the first time since the Global Financial Crisis that global growth is as solid and as synchronized as it is now. We believe that these global growth trends are likely to persist and that the risk of an imminent recession remains low.”

“Even as the Fed trims its balance sheet, the other major central banks are likely to continue QE. We believe that the overall global monetary backdrop is still stimulative as global short rates remain close to all-time lows.”