GREEN SHOOTS OF A GLOBAL REVIVAL

What a difference a year makes! At this time in 2016, markets were collapsing under the weight of a Clatter of Concerns…Crude, Commodities, Currency, China, Credit and Central bank divergence. Those fears have since dissipated as we enter a new year and perhaps a new phase of renewed global economic activity.

We examine a series of modest, but meaningful, inflection points in the global economies and markets in recent months. We believe that these changes hint at a mid- to late-cycle revival of economic growth and may offer welcome relief from the shackles of recent economic malaise.

A NUMBER OF INFLECTION POINTS

The sharp decline in crude last year to $26 per barrel stoked fears of a global recession and, along with a rise in the U.S. dollar, created headwinds for U.S. corporate profits. Investors are now more comfortable that the fall in
oil prices was more an issue of excess supply than a symptom of falling demand. Oil has stabilized above $50 per barrel after the OPEC agreement to cut production. The U.S. dollar has held steady for the last year or so and is less likely to hold back earnings of multi-national U.S. corporations.

Nominal growth in China is projected to exceed 10% as prospects of a hard landing in 2017 have receded. China is now less likely to export deflation as the turnaround in nominal growth is influenced by reflation from its weaker currency and continued stimulus. The Fed avoided a potential policy misstep by adjusting its speed of rate hikes to become better aligned with the observed pace of U.S. economic activity. Credit markets have recovered as contagion and default risks have fallen.

The most tangible and explicit manifestation of these changes can be seen in the scorecard for U.S. corporate profits. The earnings recession that began in 2015 seems to have ended in the third quarter of 2016. Q4 2016 earnings growth is now projected to be positive at around +4% to 6% and the recovery in profits is expected to continue into 2017.

Stock prices recovered from their early 2016 losses in tandem with these economic and fundamental inflection points. The U.S. election provided further impetus to the stock market rally on hopes of pro-growth policy initiatives. We look next at growth prospects here in the U.S. and overseas and their implications for the stock and bond markets.

GLOBAL GROWTH… A LOOK AHEAD

In the U.S.
We begin our global preview with a brief look at the U.S. economy and markets. The outcome of the U.S. election has stirred strong reactions at many levels and especially within the financial markets. The rise in stock prices is well ahead of any observed change in actual fundamentals and this has further divided the investment community on the outlook ahead.

Here is a recap of the market action so far since the election. At a broad level, stocks are up close to 10%, bond yields have gone up by about 0.6% and bond returns are negative at around -2%. At a more granular level, economically sensitive sectors have led the rally, small company stocks have outperformed and credit spreads have narrowed.

The optimism in the stock market is based on the potential for pro-growth and pro-cyclical policies from the new administration. We believe that fiscal stimulus and structural reforms can be important new drivers of economic growth going forward. As we have highlighted, the hand-off to these newer initiatives reduces the over-reliance on low interest rates as the sole engine for growth.

Each of these two initiatives by itself may not be as effective as the combination of the two. After all, tax cuts and infrastructure spending alone would only elevate already high deficits, but a simultaneous reduction in regulations may boost net government revenues from higher growth and lower expenditures.

We are cognizant of the many gaps that exist between economic reality and market expectations. Early executive orders have focused more on trade and immigration than on substantive issues like tax cuts and reforms. Sentiment and confidence indicators are higher but hard economic data is not. Prices have shot up, but earnings haven’t budged and so P/E multiples are optically and transiently higher.

The new President has started to implement a number of campaign promises and we see no reason to suspect that
pro-growth initiatives will be abandoned or discarded. We remain cautiously optimistic about a modest uptick in growth and meaningful catalysts for earnings from lower regulation and a corporate tax cut.

And around the Globe
In contrast to the still diffuse U.S. outlook, we observe more visible signs of a synchronized global revival. We highlight a couple of the more striking influences that support continued growth. 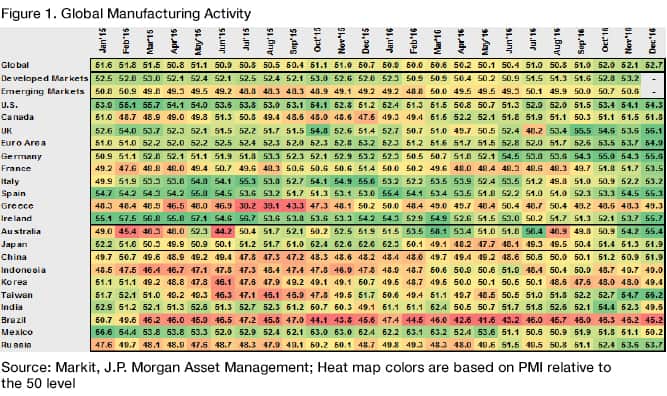 1. A steadily improving “heat map” of global economic activity
Leading economic indicators have been steadily improving over the last several months. The Purchasing Managers Index (PMI), a survey-based measure of future economic activity, is one such indicator. The global manufacturing PMI is shown below in Figure 1 and the green shoots of a global revival are visually apparent.

2. Significant monetary stimulus
Unlike the Fed, other central banks are still easing and stimulative. The European Central Bank is expected
to increase its balance sheet by more than $1 trillion in 2017 and the Bank of Japan by more than $0.5 trillion. Similar balance sheet activity in the past has led to higher levels of bond purchases and, therefore, lower interest rates. The cumulative effect of the aggregate monetary stimulus is best reflected in today’s low levels of global short-term rates.

As Figure 2 shows, current global short-term rates are well below those from a decade or two ago and should support both growth and valuations going forward. 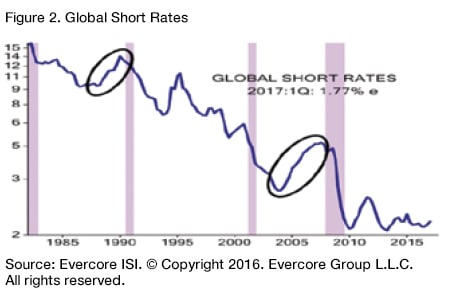 In a year of transition, we are mindful of the risks posed by policy or execution missteps. At this early stage, we believe that meaningful pro-growth policy initiatives are likely to get implemented.

As a result, we remain constructive on a modest pickup in the global growth outlook. A careful Fed and accommodative foreign central banks still leave global interest rates at attractively low levels. Against the backdrop of an earnings recovery and incrementally higher economic growth, we continue to favor stocks over bonds.