After an abnormally calm and placid 2017 in the global equity markets, a higher and more normal level of volatility has resurfaced in 2018. The year got off to a good start as the momentum from tax cuts pushed U.S. stocks higher by 8% in January. Investor focus shifted in early February to an uptick in inflation, a steady rise in interest rates and talk of tariffs and trade wars. Stock markets corrected by about 10% in February, retested those lows in March and have gone sideways in recent weeks.

Even as growth remains strong in 2018, there are increasing concerns that we may be at or close to the end of the economic cycle. The inflection in U.S. monetary policy from easing to tightening has removed one important tailwind for the bull market. Are there other engines for growth that can sustain and prolong this expansion? Will a rise in inflation, interest rates and fiscal deficits derail the current growth trajectory? Or will a global trade war contribute to a slowdown in growth and a pickup in inflation?

We address these and other related topics in our commentary this quarter. The seeds for a long and slow recovery were planted by the severity of the last recession. We believe that the latency of this organic recovery, immediacy of the fiscal stimulus and prospects for more deregulation could extend the economic cycle longer than most expect.

We first pointed out the potential for a synchronized revival of global growth back in late 2016. It duly came to pass in 2017 as all major economies of the world registered positive economic growth for the first time since the Global Financial Crisis. The global outlook for 2018 remains positive. As Figure 1 shows, the Global Purchasing Managers’ Index for manufacturing is still above the threshold expansionary level of 50 in almost every economy. 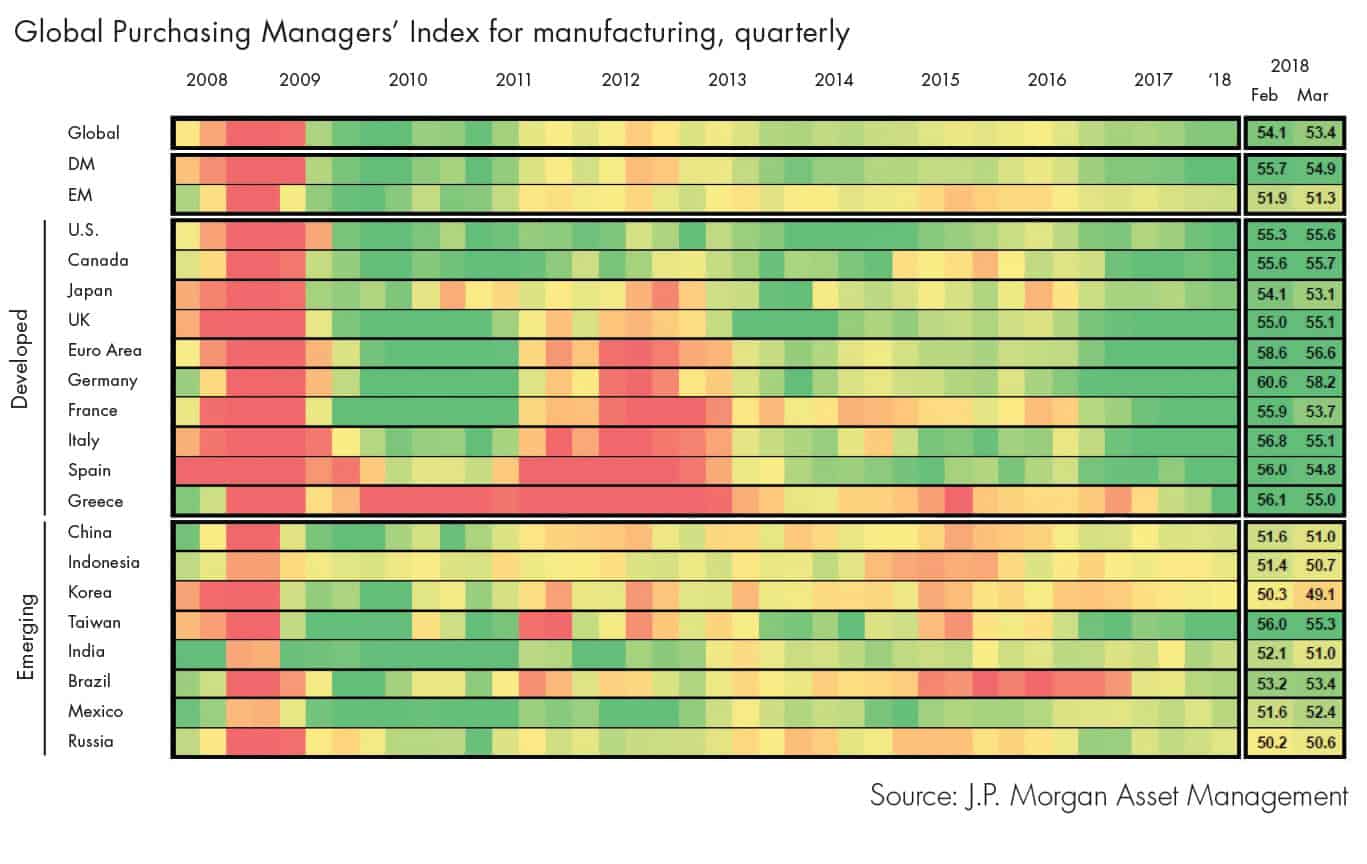 However, the global growth story is becoming a little more uneven as differences in monetary and fiscal policies emerge across different economies. The Eurozone is a case in point where the ECB is still committed to quantitative easing and growth appears to be tapering off. Nonetheless, tight labor markets and steady industrial production provide evidence that the global economy is healthy at the moment.

Even as stocks remain stuck within a narrow trading range, the 1st quarter earnings season has been nothing short of remarkable so far. More than 70% of U.S. companies have reported earnings and revenues above expectations. Earnings growth in every single quarter of 2018 is projected to exceed 17% and come in above 19% for the full year. If these expectations are met, it will be the strongest growth in corporate profits since 2011.

As attractive as this economic and earnings backdrop appears, investors have found enough changes in the macro environment to worry about new risks to the economy. We analyze these developments in our next section.

Concerns
The February selloff in global equities was triggered by an unexpectedly large 2.9% increase in wages for January. After years of worrying about deflation and dealing with disinflation, this was the first real sign of reflation in the U.S. economy. Investors latched on to the more sinister implications of rampant inflation instead of viewing it more benignly as a sign of an improving economy. Interest rates and volatility rose on the news with dramatic cascading effects.

The prolonged period of prior complacency had caused investors to not only bet against volatility, but to do so in potentially leveraged positions. The sharp rise in volatility led to an abrupt unwinding of these levered bets against volatility and exacerbated market losses. The process spiraled into a self-fulfilling prophecy as sharp losses led to further increases in volatility, which caused more selling and greater losses.

In the meantime, interest rates had begun to move higher even in January as the 2017 tax cuts fueled prospects of faster growth. The 10-year U.S. Treasury bond yield moved up from 2.4% to almost 2.95% in February and finally breached the psychological 3% level in April. The rise in bond yields forced a rerating of stock valuations and contributed to the weakness in the stock market.

As interest rates rose, investors also fretted about the growing burden of government deficits created by tax cuts and infrastructure spending. The Congressional Budget Office now projects that federal debt will rise from 76% to 96% of GDP over the next 10 years. The cost of servicing this higher level of debt will become greater as interest rates continue to climb.

And finally, if all this wasn’t enough for the markets to digest, March saw another selloff in stocks from yet another new threat. Building on its campaign promises, the current Administration announced a series of tariffs on imported goods to protect and restore American jobs. The initial announcement targeted all steel and aluminum imports and has since been modified to exempt certain allies, even as new tariffs have been added for countries with larger trade imbalances. Investors began to price in the negative effects of slower growth and higher inflation that inevitably result from global trade wars.

We acknowledge that these recent developments create uncertainty. We know that higher inflation, rising rates, greater volatility and lower stock prices lead to an overall tightening of financial conditions. But at the same time, we view them as creating more resistance to upward buoyancy and not as an insurmountable headwind. We offer the following perspectives as a partial offset to these concerns.

While inflation is undoubtedly perking up, it is not close to the runaway levels that normally end a cycle. We have written extensively in the recent past about the powerful forces holding down secular inflation. These include technology, globalization, Amazonification and the New Economy to list just a few. We expect inflation to remain contained even as it heads higher. We also observe that stock valuations are well-supported in an inflation regime of 2-3%.

We believe the bull market in bonds is over. But even as we expect rates to climb higher from here, our outlook for bonds remains relatively sanguine for two reasons. First, we expect inflation to be more subdued than in prior cycles. And second, we believe that demographic trends will lower the potential U.S. GDP growth rate in the long run. We expect the 10-year bond yield to peak below 4%, which is lower than the average level seen in prior cycles. These levels of interest rates are not nearly as damaging to stock valuations, and in many instances, have even been supportive of higher P/E multiples. 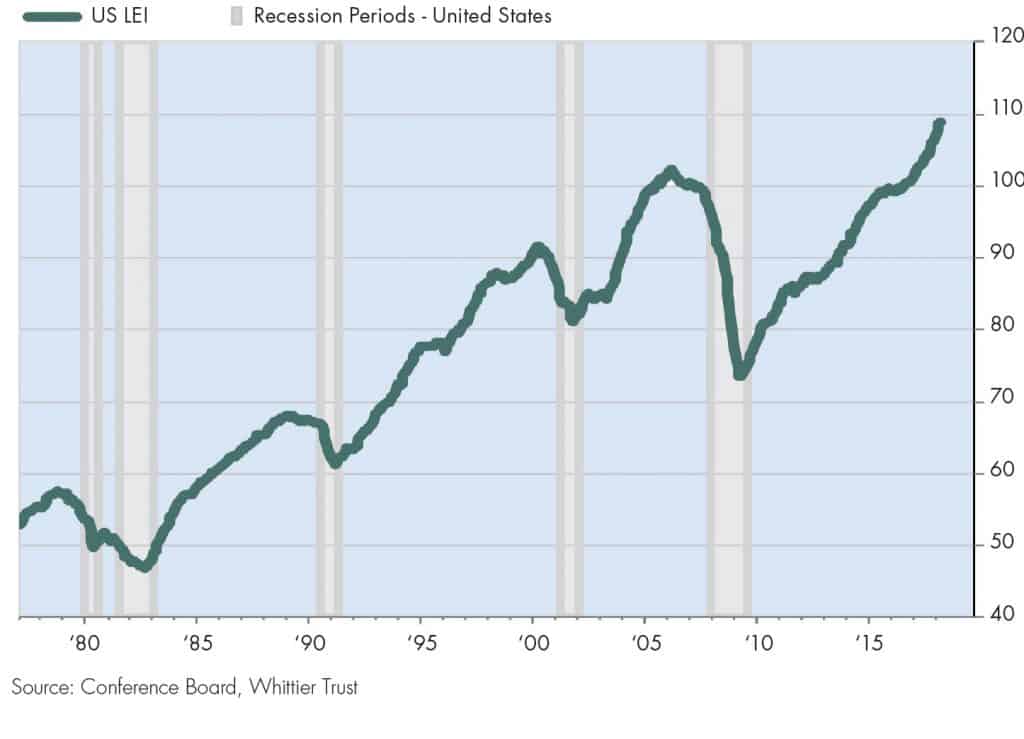 And finally, we believe the talk on tariffs is more of a negotiating tactic to extract concessions than the opening salvo in an eventual trade war. History has taught us that global trade wars are futile. We assign a low probability to the prospects of a full-blown trade war.

We are in the midst of an unusual economic cycle. Slower and more sluggish than prior cycles, it has also been longer than most others as well. Many have relied on conventional wisdom that the end is near because the calendar says so. Others have argued that the recent flattening of the yield curve, which has seen a narrower spread between 10- and 2-year bond interest rates, is an imminent precursor to a slowdown and the next recession.

We address these concerns and also discuss our growth outlook for the near term. Our key takeaways are that leading economic indicators and credit spreads do not yet suggest a slowdown and that low foreign interest rates may be the driver behind the shape of the yield curve.

There is growing empirical and academic research that post-war expansions have not become progressively more fragile with age. They have instead come to an end from high inflation and high interest rates. As we observed earlier, we do not see either scenario as a likely outcome in the near term.

The recent trend in U.S. Leading Economic Indicators (LEIs) also argues against an imminent recession for a couple of reasons.

We also look at signals for the next recession in the fixed income markets. Even as it has risen in recent months, the
10-year bond yield of 3% is still well below its historical average. The credit markets are not showing signs of undue stress as investment grade and high yield spreads remain fairly tight.

And the divergence in global monetary policies may have as much to do with the flattening of the U.S. yield curve as expectations of economic weakness. Even as the Fed is firmly into a tightening cycle, foreign central banks remain accommodative. This has kept foreign interest rates low, e.g. the 10-year German bond yield is around 0.6% and the 10-year Japanese bond is close to 0%. These low foreign rates make U.S. Treasury bonds attractive at 3% and keep the long end of the yield curve anchored even as short rates go up. 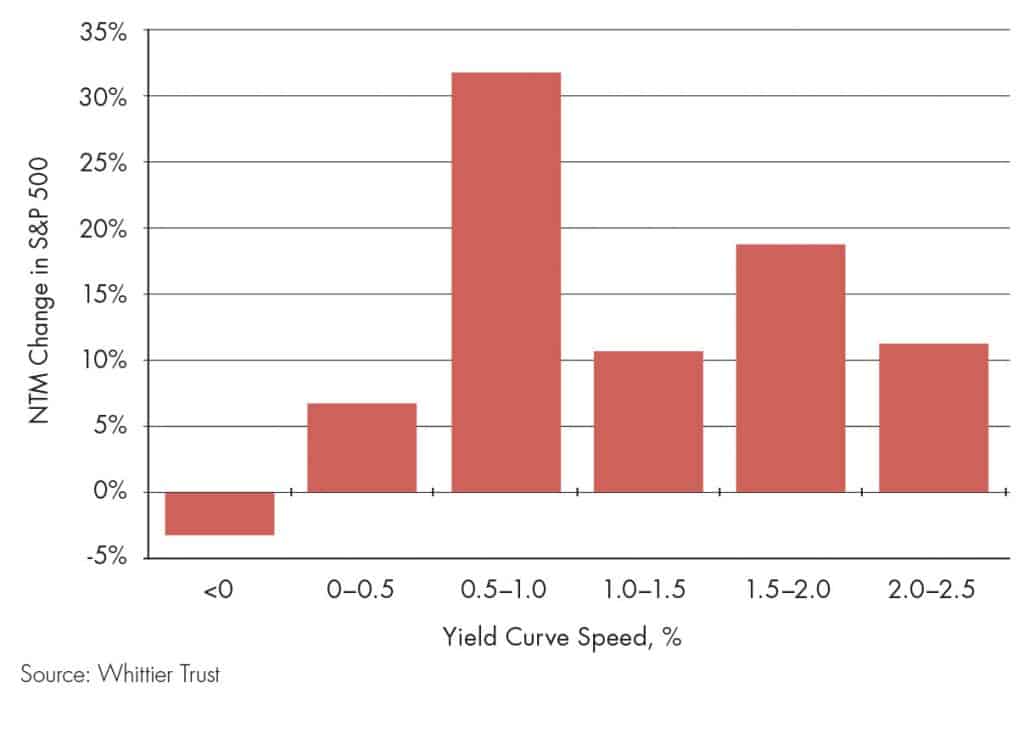 It also turns out that stock returns hold up well during periods of a relatively flat curve. In fact, the most positive 12-month stock market returns are realized when the slope of the yield curve tends to be between 0.5-1.0%… where it has been in recent months.

The current expansion has come a long way since the recession in 2008. As long as this cycle has been, the end may not be as near as many fear. There is a sluggish organic latency to this cycle which could continue to play out a little longer. The new fiscal stimulus could yet unfold over a longer time period. Further deregulation could provide a modest growth spurt. The fears of an imminent recession and bear market are
likely exaggerated.

We remain vigilant to the many risks that inevitably develop in the later stages of an economic cycle. We believe our focus on high quality investments and preservation of capital will serve our clients well in these volatile times.

“We believe that the latency of this organic recovery, immediacy of the fiscal stimulus and prospects for more deregulation could extend the economic cycle longer than
most expect.”

“We know that higher inflation, rising rates, greater volatility and lower stock prices lead to an overall tightening of financial conditions. But at the same time, we view them as creating more resistance to upward buoyancy and not as an insurmountable headwind.”

“Our key takeaways are that leading economic indicators and credit spreads do not yet suggest a slowdown and that low foreign interest rates may be the driver behind the shape of the yield curve.”

“As long as this cycle has been, the end may not be as near as many fear. There is a sluggish organic latency to this cycle which could continue to play out a little longer. The new fiscal stimulus could yet unfold over a longer time period. Further deregulation could provide a modest growth spurt.”