The remarkably short Covid recession of 2020 was followed by a rapid and powerful recovery in 2021. Bolstered by massive policy stimulus, global economies and markets were resilient enough to overcome uncertainty from virus variants and inflation spikes.

The U.S. economy grew by almost 6% in 2021 in real terms even as CPI inflation reached 7% by the end of the year. The S&P 500 index led global equity markets with a stunning total return of 28.7%. In an even more astonishing outcome, stock market volatility remained unusually low. The maximum drawdown from peak to trough in the S&P 500 index was only -5% in 2021.

The strength in the economy and the markets was based on solid fundamentals. Heading into 2022, the Purchasing Managers Index, which serves as a useful leading indicator of economic activity, still remains firmly at expansionary levels.

However, an increasingly hawkish stance from the Fed roiled the stock and bond markets early in the New Year. It wasn’t too long ago that the Fed had appeared overly sanguine about inflation. As recently as September, the Fed was projecting zero rate hikes in 2022. It has since changed its position in a number of ways.

The Fed has stepped up its pace of tapering which is now expected to end in March. It is also projecting 3 rate hikes in 2022 with more to follow in the next two years. These actions were initially met with enthusiasm in the markets as they dispelled fears that the Fed was falling behind the curve in fighting inflation.

However, what came as a shock to the markets on January 5, 2022 was the Fed’s consideration of a reduction in its balance sheet soon after the first rate hike. This trifecta of tapering, rate hikes and now quantitative tightening (QT) was deemed to be an insurmountable “triple threat” for both stocks and bonds.

>We have highlighted for a while now that we have reached an inflection point in policy stimulus and that growth will slow down from its 2021 peak. Our outlook for 2022 focuses on one key question.

Will the decline in growth be exacerbated by a policy mistake around inflation or will growth still come in above trend to sustain the economic cycle and bull market? We assess risks to the economy from the virus, inflation and the Fed. We balance these risks out against the continued tailwinds for growth from prior stimulus, easy financial conditions and a healthy U.S. consumer. Along the way, we also look more closely at earnings growth in light of historically elevated stock valuations.

Omicron, Inflation, and The Fed

We believe that Omicron will have limited economic impact despite its high rate of transmission. The current vaccines have been reasonably effective at preventing severe disease. They have also been successfully rolled out; the older, more vulnerable age groups have vaccination rates in excess of 90%.

We do not expect inflation to spiral out of control like it did in the 1970s. That bout of inflation was triggered by a supply side shock in the oil market. We do not see a similar parallel in 2022. We agree with the Fed and the consensus forecast that inflation will peak in the first half of 2022.

Our reason for this view is simple. Prices became so elevated in 2021 from the immediate shock of the pandemic that future price increases are likely to be more muted as the intensity of that shock abates.

Our third observation on inflation is a departure from the consensus view. We expect that inflation will subside at a slower pace than most expectations.

We, therefore, expect inflation to remain higher than consensus or Fed forecasts in 2022 and 2023. Having said this, we do not expect inflation to adversely impact the economy or the markets. When inflation and interest rates go up from extremely low levels towards 3 to 4 percent, stocks generally do well in a robust economic recovery.

We do not believe the Fed will commit a major policy mistake any time soon. The hallmark of its policy for over a decade has been an overly accommodative stance.

The Fed has constantly erred on the side of risking inflation from being dovish than on risking another recession from being hawkish. Its recent decision to allow inflation to run well above 2% before raising rates is another example of its desire to go slow instead of going fast.

The Fed can always be data-dependent and we expect it to alter course as necessary.

We move to the more promising drivers of growth in the next couple of sections.

Legacy Tailwind of Prior Stimulus

Investors have worried about the inflection of both monetary and fiscal stimulus for quite a while now. More central banks have raised rates globally than cut them. Fiscal stimulus going forward will be a tiny fraction of what was seen in 2020 and 2021.

We believe, however, that investors are underestimating the powerful legacy of prior stimulus as a tailwind for future growth. We discuss a few examples of how financial conditions are still accommodative on the heels of the Covid policy responses.

We begin with a look at just how massive global monetary stimulus was during the Covid crisis.

Figure 1 shows quantitative easing (QE) from the four major central banks of the world over the last 15 years. 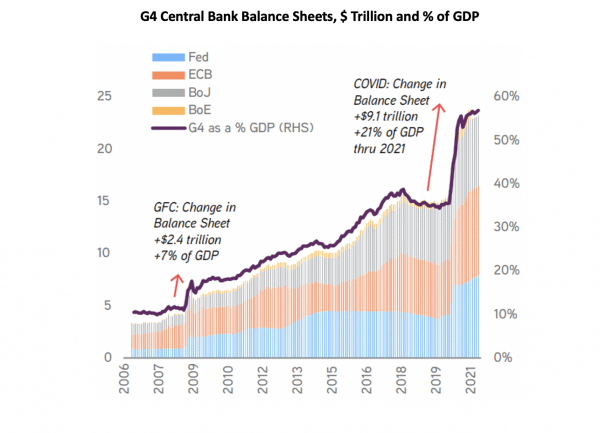 The G4 central banks expanded their balance sheets by more than $9 trillion in the Covid crisis. This injection of liquidity was a staggering 21% of GDP. It was also 3 times bigger than their policy response after the Global Financial Crisis (GFC).

The Fed alone grew its balance sheet by more than $4.5 trillion and is now ready to start reducing it. At what pace might that happen? We turn to the last tightening cycle for a precedent. In 2017, it took the Fed almost 2 years to reduce its balance sheet by about $700 billion. We believe that any quantitative tightening in 2022 will only be a small fraction of the existing stock of liquidity that the Fed created previously through QE.

We believe that the Fed’s balance sheet will still remain sizeable and provide sufficient support and stimulus to aid above-trend growth in 2022. 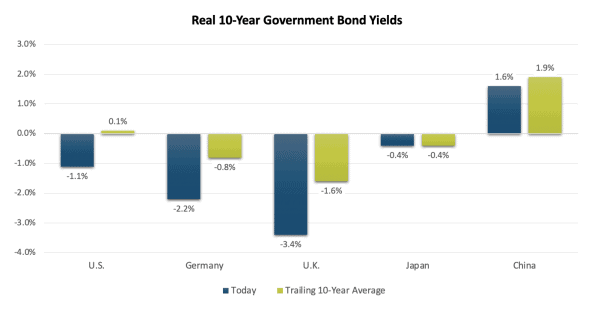 As we can see in Figure 2, real rates are negative in most countries. They are also well below their trailing 10-year averages.

We fully expect real rates to rise as growth remains strong, the Fed starts to tighten and inflation begins to subside. But because real rates will rise from such historically low levels, we expect financial conditions to still remain easy and accommodative.

We can also see legacy tailwinds from fiscal stimulus. Savings rates shot up on the heels of the initial rounds of fiscal stimulus as consumers were unable to spend all of their stimulus checks. These excess savings were banked and have since grown into a sizeable pool of reserves for consumers.

By most calculations, cumulative excess savings are estimated to be over $2 trillion. At around 17% of Personal Consumption Expenditures and almost 10% of GDP, this cash on the sidelines bodes well for future consumer spending.

And the consumer is strong in many other ways. Household net worth has grown exponentially from the rapid Covid recovery, a booming stock market and a red-hot housing market. Debt payments as a percent of household income are at an all-time low. The jobs market has almost fully recovered now with the unemployment rate below 4%.

The above-trend growth in nominal GDP also bodes well for corporate profits. We look at the outlook for earnings growth and its impact on stock prices in the next section.

The initial phase of a new bull market is typically driven by abundant liquidity. Stock prices move higher in anticipation of an eventual recovery. However, this early move in prices can happen even as actual earnings decline or throughout. As a result, P/E multiples expand dramatically in this liquidity induced phase of the bull market. We saw this play out in 2020.

We transitioned to the next phase of the equity bull market in 2021. In this growth-driven phase, earnings growth becomes the main driver of stock prices and P/E multiples begin to decline. 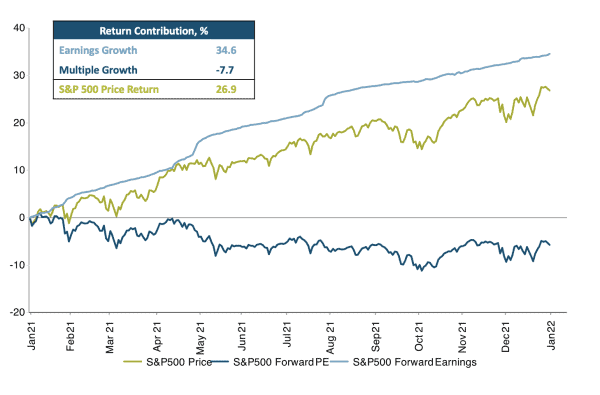 The only way to reconcile a lower return than the growth in earnings is through a decline in the P/E multiple. This multiple compression of -7.7% is shown in the dark blue line at the bottom of Figure 3.

We expect this pattern to repeat itself in 2022. The magnitude of the numbers, of course, will be different but we believe the pattern will be similar. We expect earnings growth will be strong enough to more than offset a continued decline in the P/E multiple.

Our optimism for earnings growth stems from a couple of fundamental factors e.g. revenue growth and margin growth.

Revenue growth tends to be highly correlated with nominal GDP growth and is also expected to be around 8% in 2022. At these levels, it will be significantly higher than revenue growth seen in the last two decades. We expect revenue growth to remain above trend in the foreseeable future.

We are even more intrigued by the continued contributions to earnings growth from high profitability. Profit margins for the S&P 500 index continue to rise. Net margins reached an important milestone in 2021 as they crossed the 12% threshold for the first time ever.

In fact, profit margins have grown steadily for the last 20 years from the mid-single digits to the low-double digits. Contrary to conventional wisdom, the trend suggests a structural shift upwards in profitability.

We take a closer look at profitability.

Figure 4 shows trends in profitability over time and across sectors.

Figure 4: Change in Profit Margins over Time by Sector 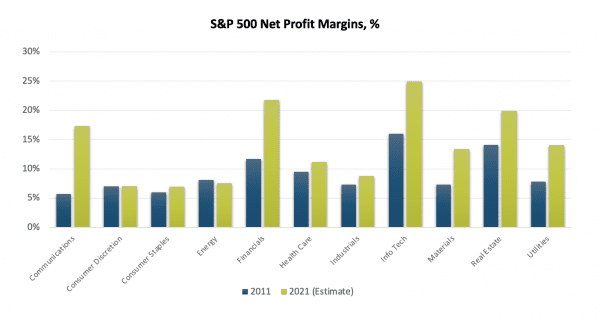 The breakdown of profitability by sector reveals several insights. 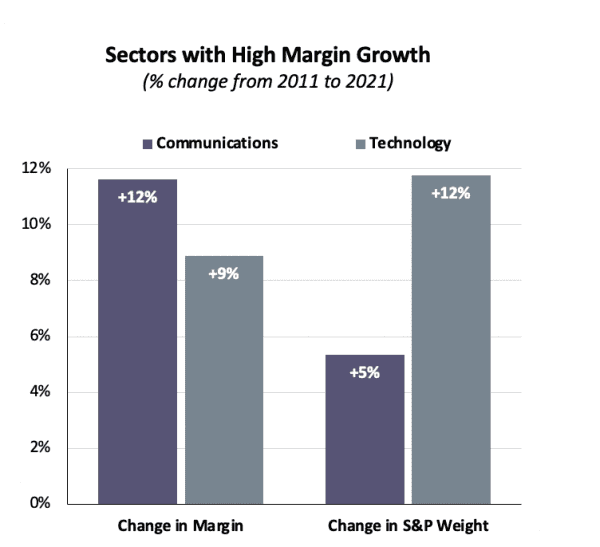 On the other hand, sectors with low margin growth, such as Energy and Consumer Staples, show the opposite outcome – no growth in profit margins and a decline in their index weight.

These observations help us understand the recent rise in profit margins.

We use these insights to inform our economic and market outlook.

We expect the post-Covid economic cycle and bull market to continue in 2022 but with several important distinctions.

This cycle is more likely to resemble the post-Internet Bubble recovery than the post-GFC one. A key characteristic of this cycle will likely be steady reflation instead of the sustained disinflation we saw in the previous cycle. And finally, we expect stock returns in 2022 will likely be lower and more volatile than they were in 2021.

We summarize the key tenets of our 2022 outlook below. We believe:

We recognize that inflation is now the main investment risk in 2022. We are mindful that the seismic dislocation of global supply chains may create some unexpected outcomes and pose risks to our views on inflation and the Fed.

Nonetheless, we remain optimistic on the economy and the market. We expect growth to remain above trend and stocks to perform well. At the same time, we exercise restraint and discipline in managing portfolio risk.

Inflation has now emerged as the biggest investment risk in 2022. Will inflation or a related Fed policy mistake exacerbate the deceleration of growth from its 2021 peak?

We believe growth will still come in above trend to sustain the economic cycle and bull market.