The U.S. economy maintained its strong momentum in the second quarter. Earnings estimates for the next 12 months also continued to rise on the heels of a robust economic recovery. As a result, the U.S. stock market generated solid returns in the second quarter. The S&P 500 index rose by 8.5% while the Russell 2000 index gained 4.3%. Bond yields remained surprisingly subdued despite a pronounced rise in inflation.

The most notable economic development in the second quarter was a surge in inflation at all levels. A closer examination of the data revealed that more than 1/3rd of the annual rise in prices was attributable to the pandemic – a “base effect” related to lockdown lows from a year ago and unusually high inflation in select categories because of component shortages.

Bond yields initially moved higher on the news but then declined as investors began to align their views on inflation with those of the Federal Reserve Bank.

The Fed conducts monetary policy to fulfill its dual mandate of promoting maximum employment and stable prices. In balancing these objectives, the Fed has clearly articulated that the uneven post-pandemic jobs recovery remains a bigger concern than the risk of higher inflation.

Even as inflation picks up, the Fed is willing to tolerate it for two reasons. One, the Fed expects the rise in inflation to be transitory. And two, it believes that letting inflation run above 2% for as long as it was below 2% will lead to a more sustainable economic recovery.

The trajectory of job growth from here on, therefore, plays a big role in the Fed’s monetary policy. As investor attention shifts from inflation to the labor market, we focus on the road to full employment in the U.S. economy.

We examine the U.S. labor market in detail to better understand the following issues.

The Diffuse Notion of Full Employment

The concept of full employment is intuitive to grasp and yet elusive to quantify. The natural rate of unemployment which brings the economy to full employment, and the labor market to equilibrium, is not easily observable and is, therefore, hard to measure or predict.

Let’s understand the basic components of the unemployment rate.

While the discussion so far helps us understand full employment conceptually, it falls well short of any practical insights and takeaways. We, therefore, turn to empirical evidence to gauge how close we are to full employment today.

We will look at the labor market in considerable detail in later sections. At this point, we address the topic of full employment by looking at two simple measures – one based on employment levels and the other based on unemployment rates.

We first look at all employed people in the U.S. as a percentage of the civilian population in Figure 1. The Civilian Noninstitutional Population (referred to as “CNP” from here on) is comprised of all people above 16 years of age who are not part of institutions such as the U.S. Armed Forces, nursing homes or prisons.

Figure 1: Employment as Percentage of CNP 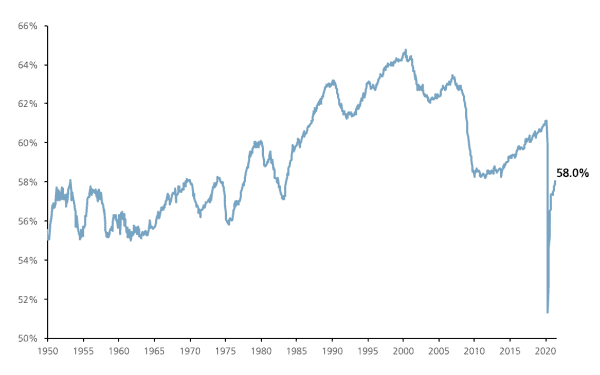 The high point in this data is not necessarily the true limit of full employment. But it is certainly a useful marker for what maximum employment has been so far in the U.S. economy.

Over the last 70 years, the highest level of employment as a percentage of the CNP was about 65% in early 2000. After declining through the Global Financial Crisis, employment had inched back up to around 61% of CNP just before Covid hit. Today, it stands at 58%.

The proportion of active workers within CNP has declined in recent years and employment is, therefore, unlikely to reclaim its previous high of 65%. Nonetheless, at 58%, it remains well below what is the likely true level of full employment at this time.

The U3 rate of unemployment is the most widely reported metric based on the proportion of unemployed workers within the labor force. We also show the U6 rate, a broader gauge of unemployment, which includes discouraged workers and under-employed part-timers.

Figure 2: U3 and U6 Unemployment Rates 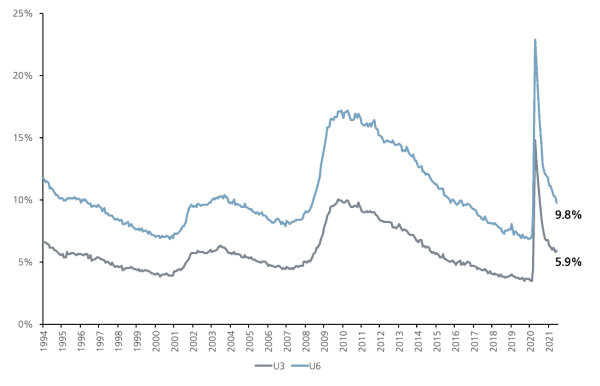 We can see in Figure 2 that the all-time lows in U3 and U6 were achieved just prior to Covid. These historical lows of 3.5% and 6.8% for U3 and U6 respectively in early 2020 serve as a useful, albeit imprecise, proxy for levels of full employment today. The current U3 and U6 unemployment rates of 5.9% and 9.8% are still well above their historical lows.

Our early assessment so far suggests that we are well removed from full employment at this point.

We next address the shrinking share of the labor force within the CNP and its likely impact on slack and wage inflation.

We break down the Civilian Noninstitutional Population into its different components in Figure 3. 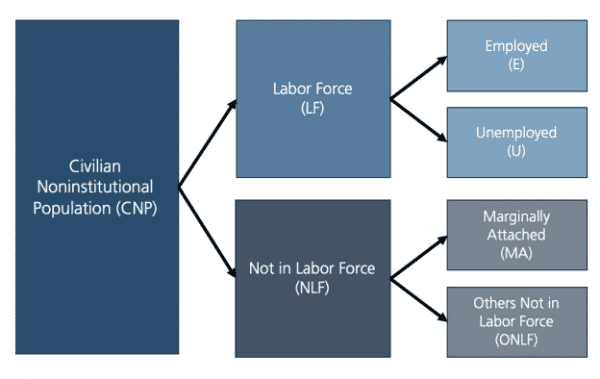 There are three key lines of segmentation in Figure 3.

This framework now allows us to define one other important and related concept. While we looked at employment levels and unemployment rates earlier, we now analyze them jointly by studying the entire labor force within the civilian population.

The labor force participation rate (LFPR) is simply the proportion of the labor force within the CNP; LFPR = LF / CNP. We frame our first key question for analysis.

Economic downturns clearly play a role in the size of the labor force and the level of under-employment. This happens in a couple of different ways. Using Figure 3 for reference, a subset of unemployed workers (U) become marginally attached (MA) and drop out of the labor force during a recession. Some employed workers (E) also shift to working part time for economic reasons (PTER).

Both of these effects were at play during the Global Financial Crisis (GFC) of 2008 when labor force participation declined. If this decline was cyclical in nature, one would have expected it to rebound in the ensuing economic expansion.

But it did not! The labor force participation rate continued to decline through the post-GFC recovery. We look for other explanations of declining participation rates and find the answer in underlying demographic shifts.

The baby-boom generation is generally defined as people born between 1946 and 1964. For many decades now, the aging of this generation has significantly affected the size and composition of the labor force. 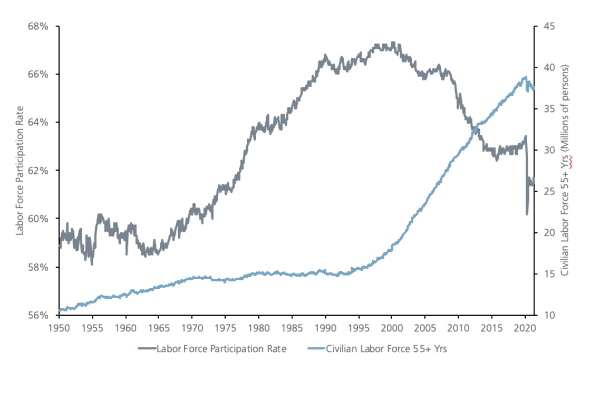 Labor force participation peaked in early 2000 at around 67% and has steadily declined since then. While the participation rate of women has been relatively steady in recent decades, we see an important shift in the age distribution of the CNP.

The oldest baby-boomers were born in 1946 and turned 55 in 2001. The decline in the labor force participation rate coincides remarkably with this inflection point in the aging of the U.S. population.

In the last 20 years, Figure 4 shows clearly that the number of people 55 years and older has risen sharply. We believe that the aging of the CNP has played a big role in the decline of labor force participation rates.

Because demographic forces are secular in nature, we expect the inexorable downward pressure on labor force participation to continue.

We, therefore, do not expect a big uptick in the labor force participation rate to provide a ready source of workers to ease potential wage inflation.

Let’s focus then on just how tight the labor market really is. We think of labor market slack in the context of both the demand for labor and the supply of labor.

We have read a lot about labor shortages of late as more jobs become available during the reopening. One of the more telling statistics on that front is that the number of job openings (9.2 million) is now almost the same as the number of unemployed people (9.5 million).

This allows us to frame our second important question for investigation.

2. If labor force participation is likely to remain well below its prior highs, how much slack is there in the labor market to ease wage inflation pressures?

The short answer to this question is that there is still considerable slack left in the labor market. The answer initially seems counter-intuitive – in light of how tight the labor market appears to be in terms of job openings (JO) and unemployed workers (U).

The key to deciphering this apparent anomaly is to account for the current level of under-employment in addition to a likely partial rebound in labor force participation.

As the economic recovery continues, a number of marginally attached people (MA) may get drawn back into the labor force. At the same time, under-employed workers who are part-time for economic reasons (PTER) could return to full-time employment.

We re-designate the available pool of workers as U + MA + PTER. Figure 5 shows how this leads to significant excess slack in the labor market. 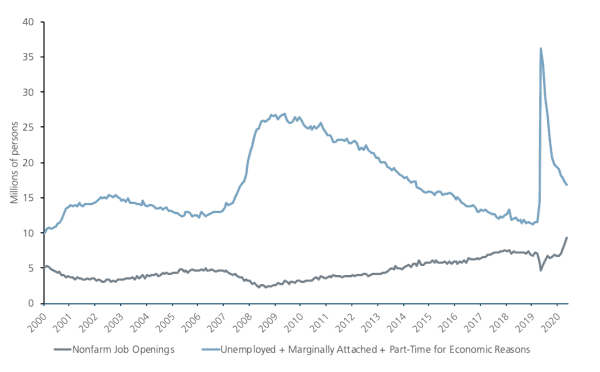 Here are the key observations from Figure 5.

The Fed recently revised its interest rate projections at the June FOMC meeting. The median forecast from the Fed is now 2 rate hikes by 2023. 11 out of 18 voting members now expect the Fed funds rate to be at 0.5% or higher in 2023.

The Fed has linked the future path of monetary policy to developments in the labor market. It is, therefore, useful to look at the Fed’s projected unemployment rate in 2023. The Fed expects the U3 unemployment rate to decline to 3.5% in 2023 – curiously the same level as its pre-Covid all-time historical low.

So here is the third key question confronting investors. 3. Is this timeline of Fed policy actions appropriate or not? Will it be too late to hike because the labor market is already too tight?

At this point in the commentary, our views are probably apparent to the reader. In our discussion of Figure 5, we suggest that it could well take another 2-3 years for the labor market to reach its pre-Covid equilibrium. We do not believe that the labor market is overly tight at the moment or that wage inflation is imminent.

The Fed is willing to trade off higher inflation to ensure that the labor market heals fully and evenly. We examine the labor market in detail to address investor concerns that the labor market may already be too tight and that accommodative Fed policy is, therefore, misguided. Here are our key insights.
We acknowledge the unusual times in which we live. The pandemic is not fully behind us, especially outside the U.S., and unprecedented stimulus may well trigger some unexpected adverse outcomes.
Through this uncertainty, we remain constructive on the economy and markets and advocate a pro-cyclical tilt in client portfolios.
Download PDF

“Investors worry that the labor market may already be too tight and that accommodative Fed policy may, therefore, be misguided.”

“We believe there is enough slack in the labor market to allay those concerns.”